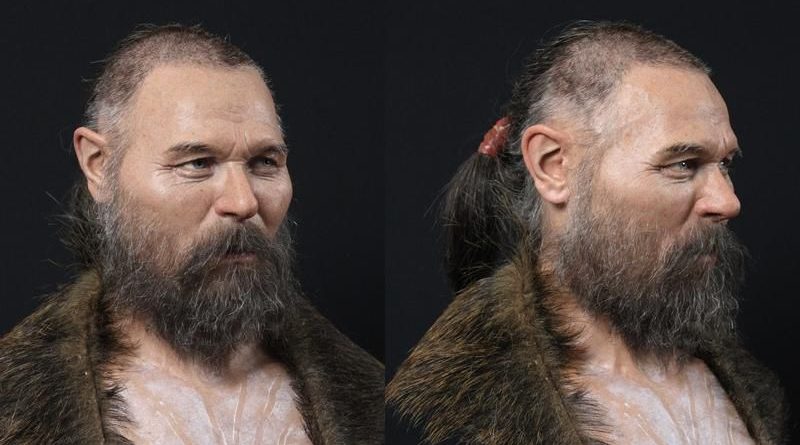 In 2011, Swedish archaeologists found human skulls mounted on stakes at an 8,000 year-old burial site, representing a behaviour rarely seen among prehistoric hunter-gatherers. An incredible, computer-aided facial reconstruction finally puts a face to one of these skulls. Swedish forensic artist Oscar Nilsson created this stunning reconstruction ug a replica of the 8000 year-old Cro-Magnon skull, which belonged to a Mesolithic man who died in his 50s. Using clues derived from archaeology and genetics, Nilsson sought to create an accurate portrait of this prehistoric Cro-Magnon, whose head was mounted on a wooden stake after his death.

New AI facial reconstruction now allows modern viewers to envision this mysterious ‘Cro-Magnon’ with their ‘Long Head’ prominent cheekbones, blue eyes and light brown/blond hair. According to the National Geographic. Archaeologists found the man’s cranium—as well as the skulls of eight other adults and one infant—in the boggy sediment of the Kanaljorden excavation site in Motala, Sweden, in 2012. The discovery marked the first archaeological evidence of Mesolithic People using dead skulls – perhaps as a warning or punishment for crimes?

Kanaljorden is of particular interest because the remains found the bodies were arranged in such an unusual, purposeful way, according to Elaina Zachos of the National Geographic. The human burial, which also included animal bones, was placed on a stone platform, which was probably the remains of a reincarnation site and Dolmen, submerged in the middle of a small lake. Researchers found remnants of wooden stakes inside the skulls of two of the men.

To give one of these ancient humans—a man nicknamed “Ludvig”—a face, Nilsson scanned his skull and created a 3-D plastic replica of it, reports George Dvorsky for Gizmodo magazine. The forensic artist drew on genetic evidence to capture Ludvig’s pale complexion and hair and eye colour. But the biggest challenge stemmed from what the skull lacked.

“The jaw was missing, so I had to calculate and reconstruct it from studying and measuring the skull,” Nilsson tells Smithsonian magazine via email. “This is time-consuming and difficult, [and] the error margin, of course, gets bigger when such a vital part is missing.”

Though most adult Mesolithic skulls in the grave had no human jawbones, a 2018 paper on the find detailed the presence of jawbones from various animals, including bears, wild boars, deer, moose and badgers.

The wild boar remains inspired Nilsson to give Ludvig a cloak made of the animal’s hide. However, we know that weaved clothing was available at this time in history – yet academia loves to continue this ‘Stoneman primitive narrative’ in all their illustrations, confusing the public to the sophistication of these ‘megalithic Builders’ of the Mesolithic period.

Ludvig’s hairstyle (sadly) also takes its cue from boars. The front is similar to the short bristles on the animal’s body, while the back features a wisp of hair reminiscent of a tail – no doubt inspired by the lasted Hollywood Viking production?

Nilsson tells Smithsonian that he hopes this styling will make people wonder how Ludvig cut his hair. Sharp flint tools could have done the job, but the hunter-gatherer probably would have needed help from a Mesolithic “hairdresser.”

The front of Ludvig’s hair is similar to the short bristles on boars’ bodies, while the back features a wisp reminiscent of a pig’s tail. (Oscar Nilsson)
Researchers are unsure of Ludvig’s exact cause of death. The facial reconstruction includes a prominent one-inch wound on the top of his skull, but the injury showed healing signs. Puzzlingly, the adult skulls found at the burial site exhibit distinctive trauma patterns: Females sustained injuries on the back and right side of the head, while males suffered a single blow to the top of the head, according to National Geographic.

“Somebody gave them love and care after this [trauma] and healed them back to life again,” study co-author Fredrik Hallgren, an archaeologist at the Cultural Heritage Foundation in Västerås, Sweden, told Live Science in 2018.

Why Ludvig’s skull wound up on a wooden stake is also unclear. Prior excavations suggest that the Mesolithic people tended to respect the bodily integrity of the dead. And the practice of decapitating enemies only emerged later in history – which seems to indicate that this was a punishment and that the society had laws that included the death penalty and exhibition to deter similar acts in the future, showing the levels of this advanced civilisation.
“The fact that two crania were mounted [on stakes] suggests that they have been on display, in the lake or elsewhere,” co-author Anna Kjellström, an archaeologist at Stockholm University, told Gizmodo in 2018.

The dig at Kanaljorden didn’t yield any direct evidence that the people buried there were decapitated or had their jaws forcibly removed. Archaeologists say somebody may have removed the individuals’ heads and lower jaws after significant decomposition took place, perhaps in the context of another burial.

As Nilsson tells Smithsonian, he hopes the facial reconstruction will connect people not just to history and archaeology but also to science’s power, which provided the intimate details needed to bring Ludvig back to life.

The socio-cultural behaviour of Scandinavian Mesolithic Cro-Magnon megalithic builders has been challenging to understand due to the dearth of sites thus far investigated. However, recent excavations at Kanaljorden in Sweden have revealed disarticulated human crania intentionally placed at the bottom of a former lake. The adult crania exhibited antemortem blunt force trauma patterns differentiated by sex that were probably the result of interpersonal violence; the remains of wooden stakes were recovered inside two crania, indicating that they had been mounted. Taphonomic factors suggest that the human bodies were manipulated prior to deposition. This unique site challenges our understanding of the handling of the dead during the European Mesolithic.

The assemblage includes 34 human elements, 19 cranial and 15 post-cranial parts. The remains of at least ten individuals—nine adults (based on the occurrence of occipital bones with a complete cruciform eminence) and one foetus/infant—were identified. Relatively complete crania primarily represent the adults and the infant by an almost complete skeleton. Two crania were identified as female and four as male (the sex assessments are in agreement with the genetic sex). As most of the crania were fragmented and incomplete, suture closure could be recorded in only two individuals. Both were male—one classified as an old adult (50+ years of age), and the other as a middle adult. In addition, two individuals were classified as at least young adult age (20–35). Dental attrition could be assessed for eight elements, all indicating fully adult individuals. The length of the long infant bones suggests that they came from a foetus of approximately 36–40 weeks of age, indicating that the infant was stillborn or died soon after birth. Apart from the skeleton of the infant, all post-cranial human elements were disarticulated and came from fully developed individuals.

More information on reconstruction of the 8000 year-old Cro-Magnon skull can be found on our video channel www.prehistoric-britain.online 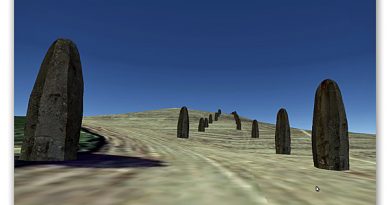